What is a swale?

A swale is a mainframe construct used in permaculture systems.  It is a water harvesting and tree-growing system.  It consists of 3 main parts:  A berm, a trench and a back cut.  A swale is placed in a strategic location in the landscape to allow it to capture as much water as possible.  The way this is achieved is by placing the swale on contour.  That means the swale is level all the way across.  The concept of placing something on contour is difficult to understand at first.  Think of a contour map that shows elevations.  You probably remember these from your Geology class when you were in school.  Each one of the lines on a contour map denotes a specific elevation.  As you follow these lines on the map they are the same elevation along that same line.  You could place a swale on one of those lines this would mean your swale would be level or on contour.

A swale is placed on a slope.  This is where you start thinking in 3D.  There are no set parameters or size restrictions per se.  Size is based on what else interacts with the swale.  For example, I have a large amount of space between the swale I constructed and the one I wish to construct.  The space between the two swales  is where I will have a paddock grazing area.  Other factors may be limitations on how deep you can have your base and the maximum height of your trees that you plant.  Tree shading  may cause you to add distance to another swale. 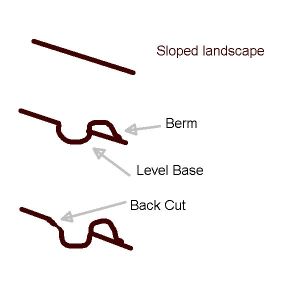 The base of the swale is the trench.  It is the most important that this be as level as possible.  Think of spilling water on a counter top.  The water spreads along the counter since it is level.  Water that enters the swale will do the same thing.  At first the water will stop and then spread out and last, soak in.   The berm is the material removed from the level base.  This is placed on the downhill side and planted with trees or living mulch.  When water enters the swale from the uphill side it fills the swale and gravity pulls it under the berm hydrating the land on the downhill side.  Adding a back cut will ease erosion.  You can also plant into the back cut.  It is best to limit it to a cover crop.  There are hard rules in permaculture so if you wanted to plant trees in the back cut you can as well.

The right tool for the job:

I rented a mini-excavator:

The bigger the project, the bigger the machine you will need.  This will speed things up too.  I had the option of an 18″ or a 12″ bucket.  I chose the 18″.  The bucket had teeth on it so it was able to cut the ground better, but left the back cut and the level base with a rougher look than a smooth bucket.  You will see in the pictures.

Mark your swale with paint and flags.  As you move earth you will lose some reference points.  It is better to have as much help as possible.  I marked the location of my swale using a laser level.  I will go into laser levels in another post.  Basically your starting point with your level is where you calibrate your level.  From there you take readings to match the elevation from your starting point.  As you go along the landscape your swale might bend and turn.  Take many readings as you can steer your swale if your terrain is bumpy. 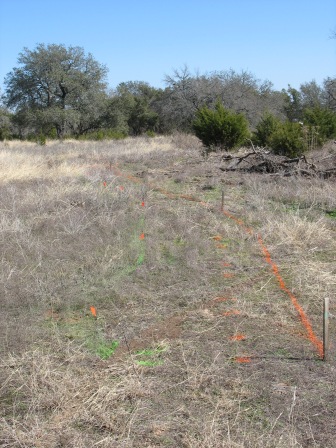 The orange line on the right is the downhill side.  The green line on the left side with the flags is my end point on the back cut.  Four feet to the left of the solid orange line are green spray marks every 10 ft. or so.  I used these green marks to denote end of the swale base and the start of the back cut.  I started the machine at the very top end of this picture and ran it backwards up the bottom end of this picture.  I will explain why in later on.

This picture is from a view inside the excavator.  I am about 40% done with the base at this point.  The material removed is placed on the right.  This will form the berm.  You can see that I am working backwards from the “end” of the swale.  I could have started from the opposite direction, but I would have had the sun in my face during the whole project.  Take that in consideration when you are beginning a project like this.  In this picture you can see the bucket of the excavator.  It has teeth on it.  I wasn’t too sure of the composition of the soil at this place on my property.  This was my second time using an excavator on my property and I ran into shallow soil my first dig.  I didn’t run into any stone at all here, so I could have gotten away with a smooth bucket.  I was so thankful when I discovered I had up to 9 inches of topsoil and beautiful red sandy loam sub-soil.  I went a total of 3ft. down.  The base of the swale is about 4ft. wide here.  The excavator was about 4.5ft. wide.  So I was able to use the excavator as a point of reference on how wide to dig. 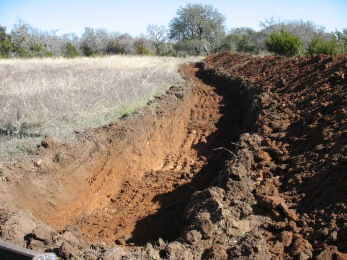 This picture shows the base completed with the berm on the downhill side.  This picture gives a good representation of how much dirt was removed.  After I completed the back cut, I reshaped the berm.  I should have done a better job of getting the berm closer to the edge of the base.  You can see almost and 18″ gap between the berm and the edge here.  You can also see how the teeth on the bucket left ruts in the ground.  I would have benefited from a smooth bottom bucket.  Come to find out the facility where I rented the excavator didn’t have one.  Use what you can get.  The next step is to add the back cut.  I started at the opposite end of the bottom of this picture.

I am about 40% along the length of the swale in this picture.  I was able to articulate the excavator at this point to apply a gentle slope to the back cut.  I was also able to extract the topsoil from the sub-soil and put them in separate piles.  I tried to do the same thing with the topsoil and sub-soil while digging the base, but the reach on the machine wouldn’t allow me to make two separate piles on the berm.  You can see the piles from the back cut in the top left hand.  This picture shows the scale of the machine to the job.  I should have got a much larger machine, but I didn’t have the room on the downhill side to maneuver it.  There is a brush pile in the way.  Ideally you would want a machine to travel along the downhill side.  You would want enough reach on the machine to dig the base and the back cut and put the material right in front of you as that would be the berm.  You would save a huge amount of time.  There was no way that mini-excavator could do that.  The way I did it was a compromise between what machine was available, the time I had and my budget for the job.  Since I did the work I had the whole weekend to do the job. 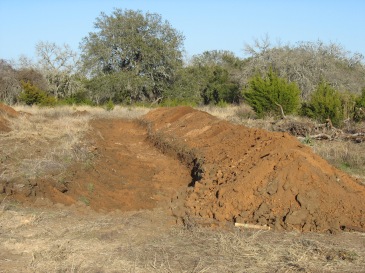 This picture shows the completed swale.  From here I need to smooth out the berm.  I brought it closer to the edge of the base cut and leveled off the top.  As I leveled the top I pulled that material more towards the down hill side.  The base of the swale and the back cut also need to be smoothed out, but that is a lower priority to caring for the berm.  The berm needs to be cover cropped and mulched before the next rain.  Try your best to keep from stepping on the berm as much as possible since the soil is not compacted.  I will post another post on my cover cropped and mulched berm.  I am also posting this link to the comments section of http://www.thesurvivalpodcast.com/calls-1-31-14#comments  Jack Spirko is my inspiration for getting into permaculture.  The first topic of discussion in that episode was swale construction.  I hope this post helps to answer some questions.

I also wanted to note that the mini-excavator is a very powerful machine.  I used it to separate the brush pile I had and knock some limbs off a large dead tree too.  While you have it for the day there are some other duties it can perform.  Please make sure that you are properly instructed on the use of any machine you buy or rent.  At any point where you feel fatigued or you find yourself being sloppy in your work, take a break!  Just a little time off the machine to get a snack, take a nap or even just get out of the sun for a little bit can help you get focused.  Remember a machine like this is destructive and capable of tipping.  Be safe.